“If every person in this world gave just a little more than they took in life, the world would be a much better place” 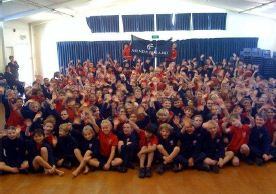 While climbing a 6856m Himalayan peak Ama Dablam in 2005, Mike spent some time with a local Buddhist leader called Lama Geshe. Although not a Buddhist himself,
Mike felt very strongly about some of Lama Geshe’s teachings. One idea that particularly struck him was that if every person in this world gave just a little more than they took in life, the world be a much better place.
With this philosophy in mind, Mike talks to one school per month for free - a commitment he fits around his flying rosters, busy family life and climbing/training activities. Since his Everest ascent three years ago he has already spoken to more than 2500 children. His talk to youngsters aged five to seven tells an exciting story

about his voyage and answers the questions foremost on the mind of his young audience such as: “Can you see New Zealand from the top?” or “How do you go to the toilet in all that gear?” When talking to older children aged seven to 12, Mike also explores the wider concept of how goal setting can help you
achieve things that right now seem impossible.
Mike is currently developing a talk for teenagers and is planning to write a children’s book for charity about his adventures.